A Conversation with Brian Jacobson

Caltech's new professor of visual culture wants his students to learn to see—closely, critically, and contextually.

Given that Brian Jacobson's earlier research focused on the architecture of film studio buildings, his affinity for the L.A. area comes as no surprise. He joined Caltech in the summer of 2020 from the University of Toronto, where he taught cinema studies and history, after earning his PhD at USC. Hired as part of the Caltech-Huntington Program in Visual Culture, which launched in 2018 with grant funding from The Andrew W. Mellon Foundation, Caltech's new visual culture professor has lately been interested in a far different research area: the visual culture of the oil and gas industry in 1950s France. We talked with Jacobson about visual literacy, the selfie through history, and how to sell a pipeline to the public.

Can you talk about the course you are teaching.

It's called Ways of Seeing (HUM/VC48), which is taken from a television show on the BBC from the 1970s—and a book of the same name—by an art historian named John Berger. It's designed as an introductory course in visual culture. The idea is to get students acquainted with skills in visual literacy and media literacy so they know how to interact with the image world they live in, and how to be smart consumers of visual media. It also covers some canonical images from the history of art and the history of media, from Diego Velázquez's Las Meninas (1656) to the photos of Dorothea Lange and recent works by Kerry James Marshall as well as things like television commercials (think: Apple's 1984 Super Bowl ad that introduced the Macintosh). And also, because it's a freshman humanities course, it's a writing course. So they're learning to write about objects in art and media.

What does it mean to have visual literacy?

I want them to have a common vocabulary to talk about the images they see, whether they're photographs or paintings or television commercials or the movies. I want them to be able to interact with those images in an intelligent way and to be able to approach the visual world with critical insight. We live in a world in which we are confronted with lots of images that try to persuade us to think about the world in a particular way, and we need to be smart consumers of those images in order to be more engaged in intellectual life and our daily experience.

How do you teach visual literacy?

Almost every time we meet, we spend the first 15 to 20 minutes focused on a single image. I ask them to spend five minutes looking at an artwork and to take notes about what they see, to maybe sketch out the image for themselves, but really just to spend five minutes silently engaging with the work. This is something that none of us do in our daily lives. Who has time to really engage with an object? Then I put them into Zoom breakout rooms to talk for five minutes with several of their classmates about what they saw. And then we talk as the whole class, to share our insights about what we've seen. I really think that practice of just regularly pausing to look at an image and think really carefully about it generates an incredible kind of perceptual apparatus. I've been amazed at how much my students see in these images and how quickly they catch onto things to look for, ways to look at the image that they hadn't thought about.

The other thing that we do a lot of is historical contextualization. So, for example, the selfie. We're always getting our phones out and taking pictures of ourselves doing things. Well, you might argue that the self-portrait, the self-representation, is one of the most important forms of image-making in the whole history of art. This takes us back to royal courts. If we go back and look at paintings of Napoleon or Marie Antoinette, say, we can see some of the same strategies that we use when we take selfies and represent ourselves to the world: the way we pose, fashion ourselves, or just generally use images to mediate our self-image. But of course we must also ask, what's the same about the way they did it, and what's different?

Give me an example of an image that you've asked the students to look at for five minutes?

Right at the beginning of class, I picked the photo of the man sitting at Nancy Pelosi's desk at the insurrection of the Capitol, who was then arrested a few days later. Another one was a photo of President Obama and then-Vice President Biden and Hillary Clinton and the team watching the capture of Osama bin Laden from the White House situation room.

I'm really interested in the degree to which different energy industries rely upon visual technologies and visual techniques to do the work they do. So, for example, in the 1950s in France, they needed to build a lot of oil and gas pipelines. How do you build a pipeline in the 1950s? Well, one thing you do is you take a lot of aerial photographs, so you can figure out where these pipes are going to go. Or you do seismographic analysis. You generate a map of what's under the ground, and you figure out based on what you can see, if there is anything down there to drill for. That's one part I'm interested in: how do they use the capacity to see to be able to do their work?

The other part is how corporations and, in this case oil and gas corporations, present themselves to the world. They do it with press releases and press conferences, but they also generate images of what their industry is like. They do it through logos and simple things like typefaces. But they also do it by making movies about their industry and by making television commercials, by designing ads for magazines, by taking lots of photographs and releasing them to the press.

There's a lot of visual data generated by these corporations to try to make sure that the public sees what they want them to see. How do we, as everyday people, come to know what the oil and gas industry is? Well, mostly we come to know it through the version of that industry that they give us. So I'm very interested in that kind of self-presentation.

And then there's a third part, which is how other people represent the industry. Think about environmental activists. Greenpeace, for example, has a very different image of the oil and gas world than ExxonMobil, and those two image worlds are in competition all the time. And we, as everyday people, are trying to navigate through that competing world to form our own opinions.

You also tie this to our desire to have more sustainable forms of energy moving forward. Can you explain?

If we want to imagine how to convince people to adopt a more sustainable future, one tool we can have is to better understand how we were ever convinced that the best way to live our lives is in an unsustainable way. The oil companies helped us embrace that unsustainable life and they're still trying to convince us of that all the time, but we don't have to believe them. But it's not enough simply not to believe them. It's not enough just to know that an oil-powered world is not a world we can live in. We also need to know how to convince people that there is another world. The oil companies are so good at convincing us of how we should live, and I think we should borrow their tools to teach people about other ways to live. And that's part of how I imagine my research, as building a kind of toolkit for a new way of creating worlds for the future.

Do you have other current projects we should know about?

I'm part of this group through the Caltech Library that is working on "Virtual Witnessing: Seeing Caltech Science," which is a research and exhibition project funded by the Getty Foundation as part of their Pacific Standard Time: Art x Science x LA program. University archivist Peter Collopy is spearheading the project with an independent curator, Claudia Bohn-Spector, and many other Caltech people are involved. The actual resulting exhibition will be in 2024, when dozens of institutions will simultaneously host exhibitions on the shared theme of intersections between art, science, and L.A. It's another way of thinking about the relevance of art and what visual culture means on this campus. 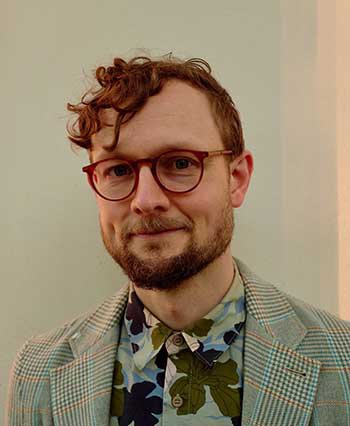