Lithium-ion batteries, widely used in devices ranging from electric cars to iPhones, are composed of a cathode made from a positively charged lithium compound and an anode composed of negatively charged carbon. Ideally, anodes would be made of lithium metal, which can store more energy than carbon. However, lithium metal anodes have a serious flaw—over time, the lithium metal grows dendrites, tiny needle-like branching structures that can grow through the battery causing it to short-circuit or even explode.

Now, a joint team of researchers from Caltech and Carnegie Mellon University has measured for the first time the strength of lithium metal at the nano- and microscale, a discovery with important implications for suppressing dendrite formation and improving lithium-ion batteries.

The work was done in the laboratory of Julia R. Greer, professor of materials science and mechanics in Caltech's Division of Engineering and Applied Science, and appears in a paper appearing online the week of December 19 in the Proceedings of the National Academy of Sciences.

"Lithium has been historically difficult to study because it oxidizes and immediately turns black upon contact with air," Greer says. "Additionally, the strength of lithium has only been measured at a large scale, with some of the measurements dating back to the '60s. Lithium dendrites are nano- to micrometer sized."

Using a special vacuum chamber at Caltech, the team, led by former graduate student Chen Xu (PhD '16), formed pillars of single-crystal lithium a few micrometers tall and some nanometers to micrometers in diameter. Each of these single crystalline lithium pillars was extracted from a larger piece of lithium, and thus each had a particular crystallographic orientation—a particular angle with respect to the original sample. The researchers discovered that at this size, lithium is up to 100 times stronger than previous measurements indicated. Additionally, collaborators at Carnegie Mellon University calculated how the stiffness of lithium dendrites varied with the crystallographic orientation and discovered that it could be as different as a factor of four.

Lithium-ion batteries produce current by the flow of lithium ions from the battery's anode, through a conducting substance called an electrolyte, to the cathode. Previous attempts to stop lithium dendrite growth have relied upon the use of a solid electrolyte, located between the cathode and anode, to physically suppress the dendrites.

"Physical suppression of dendrites with a solid electrolyte is a promising method, but thus far the electrolytes used have not been able to withstand the force of growing dendrites," says Xu. "However, we now know that lithium dendrites are much stronger than previously thought, and we can choose a stronger solid electrolyte accordingly, which dendrites will be unable to grow through."

The paper is titled "Enhanced strength and temperature dependence of mechanical properties of Li at small scales and its implications for Li metal anodes." Other co-authors are Zeeshan Ahmad and Venkatasubramanian Viswanathan of Carnegie Mellon University, and Asghar Aryanfar (MS '10, PhD '15) of UCLA. The work was funded by the Department of Energy and the National Science Foundation. 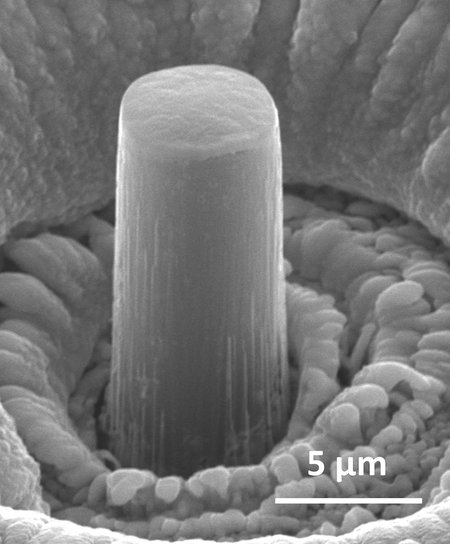 A micrometer-sized pillar of lithium. Credit: Courtesy of the J. Greer Laboratory/Caltech

Diagrams of a lithium-ion battery. When the battery is connected and charge is flowing (at right), small needles of lithium metal grow. These can destroy the battery. Credit: Courtesy of the J. Greer Laboratory/Caltech
Image Gallery Lightbox 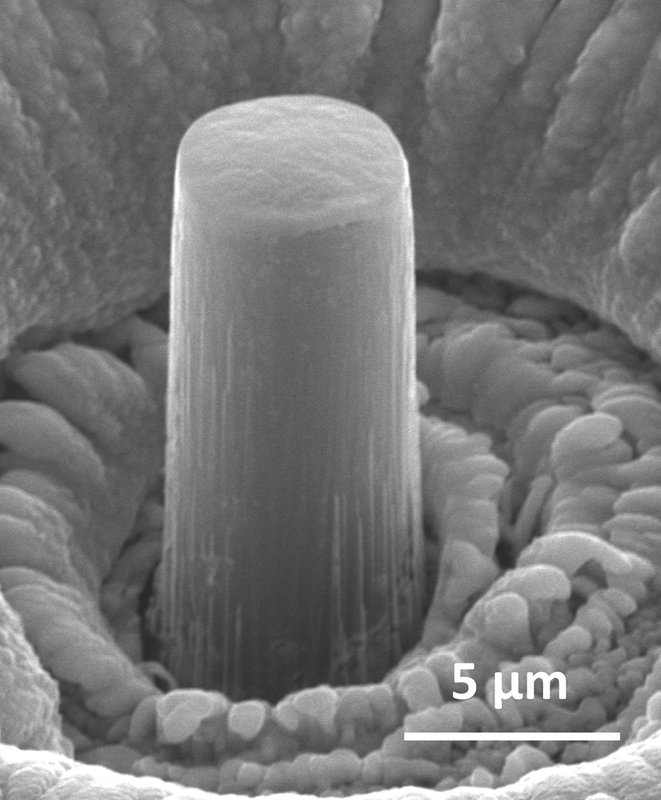 Diagrams of a lithium-ion battery. When the battery is connected and charge is flowing (at right), small needles of lithium metal grow. These can destroy the battery.
Credit: Courtesy of the J. Greer Laboratory/Caltech
Download Full Image