Frank Press, former director of the Caltech Seismological Laboratory, died on January 29 at the age of 95.

Press, who was a professor of geophysics at Caltech for 10 years starting in 1955 and ran the Seismological Laboratory from 1957 to 1965, later served as chief science advisor to President Jimmy Carter and then as president of the National Academy of Sciences (NAS) for 12 years. He helped develop innovative quantitative approaches to seismology, bringing computer technology into the field to help monitor and measure earthquakes.

Press was born in 1924 in Brooklyn. He earned a bachelor's degree from City College of New York in 1944; master's and doctoral degrees from Columbia University in 1946 and 1949, respectively; and then taught at Columbia University. In 1955, Press was recruited to Caltech by Robert P. Sharp (BS '34, MS '35), chair of what was, at the time, Caltech's Division of Geological Sciences.

Colleagues remember Press as a serious, brilliant researcher, who energetically pushed new projects and approaches. He arrived at Caltech at a time when the Seismo Lab was dominated by three titans of seismology: Charles Richter (PhD '28), Beno Gutenberg, and Hugo Benioff (PhD '35). Gutenberg had been the lab's director since 1946 and worked with Richter on the creation of a logarithmic scale for describing the strength of an earthquake. Hugo Benioff designed a simple, reliable, and sensitive strain seismometer that allowed the very subtle long-period motions of the earth to be measured and which would later emerge as key to Press's Caltech contributions.

"Caltech, with the Seismo Lab, had already emerged as the undisputed leader in earthquake research when Frank joined the Lab," says Mike Gurnis, the John E. and Hazel S. Smits Professor of Geophysics and current director of the laboratory. 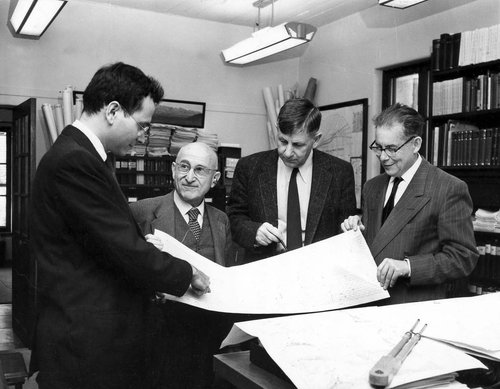 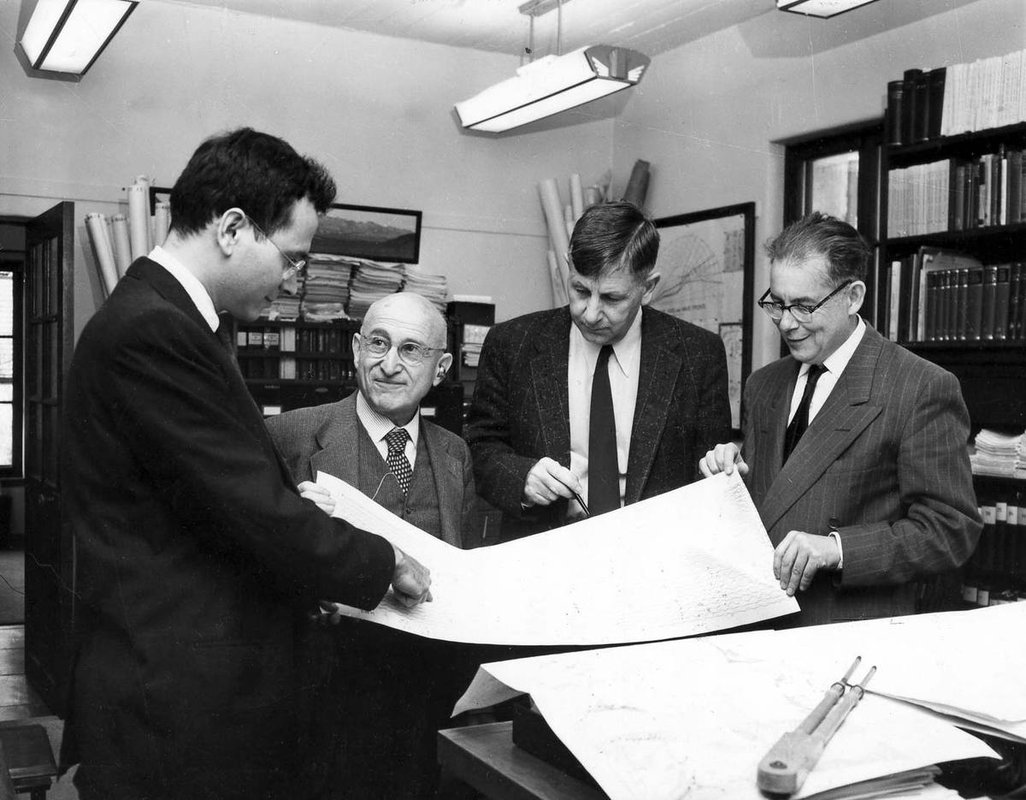 At Columbia, Press and geophysicist Maurice Ewing developed the Press-Ewing seismograph, whose design Press later improved at Caltech. It would eventually play a pivotal role in his pioneering studies on very long-period mantle waves and free oscillations.

Within two years of his arrival at Caltech, Press was named as Gutenberg's successor as director of the Seismo Lab. "Now, don't think that when I took over, I had an agenda," Press said in an interview in 1983. "The science moved ahead, and I just simply—using the resources of the lab and also the resources that I developed in the government—brought in new people and new technology. This meant computers; this meant new types of seismographs; this meant more field exploration. My attitude toward graduate students was different, I must say. I used graduate students as colleagues: I gave them the best problems to work on, and I encouraged them."

"Frank was extremely helpful and nearly always open to me and other students," says David Jackson (BS '65), professor emeritus of geophysics at UCLA, who met Press as a freshman at Caltech in 1961. "I was bewildered at the time, like many of my classmates, and I needed lots of advice, on everything from how to get to the Seismo Lab without a car, to how to handle Caltech stress and scientific careers, to how to reduce suffering around the world. Frank offered profound advice on anything I asked him about."

The Valdivia quake allowed Benioff, Press, and Stewart Smith (PhD '61) to unequivocally observe and measure the "ringing" of the earth, so-called free oscillation, for the first time The theory that large earthquakes could cause the planet to ring like a bell had been around since the 19th century, but the Valdivia quake provided the first unambiguous measurement of the phenomenon.

"This is one of the most seminal achievements in geophysics," says Gurnis, and allowed for observations of the large-scale structure of the earth. "This discovery led to the first direct constraints on how density varies in the core and mantle of our planet and in turn allowed geophysicists to determine more precisely what the planet is made of." 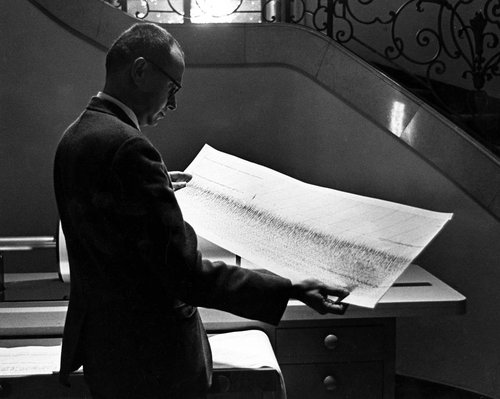 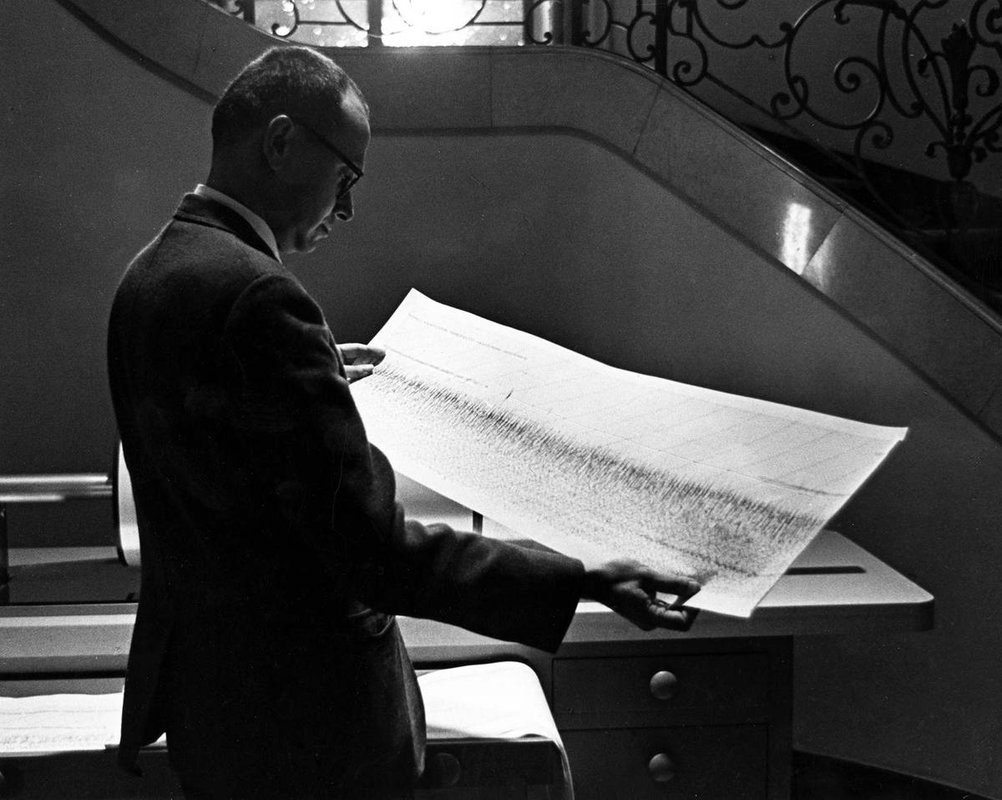 Press and his colleagues were also able to determine how the energy of an earthquake is dissipated through the earth by studying the ringing as a function of time. Along with the Alaskan earthquake in 1964, the Chilean earthquake in 1960 also allowed scientists to better understand the nature of what subsequently became known as "great earthquakes."

In the 1950s and '60s, with the Cold War reaching a fever pitch, seismologists like Press began using seismometers to detect and measure nuclear blasts. Press led a U.S. delegation that participated in nuclear test-ban talks in Geneva in 1960.

After 10 years in Pasadena, Press left Caltech for MIT. His departure from Caltech coincided with the arrival of then-research fellow Hiroo Kanamori, who was the Seismo Lab's director from 1990–98.

"Rather interestingly, when I arrived at Caltech I was given Press's office in the North Mudd Building with his name plate still on the door," says Kanamori, who is now John E. and Hazel S. Smits Professor of Geophysics, Emeritus. "Although Frank was no longer at the Seismo Lab, his influence on the research atmosphere was quite evident."

Press served as President Jimmy Carter's director of the Office of Science and Technology Policy, promoting international scientific cooperation, from 1977 to 1981, and then became president of the NAS, a position he held until 1993. In 1994, he was awarded the National Medal of Science. That year, he also happened to return to Caltech's campus as a Fairchild Scholar, arriving just in time for the magnitude-6.6 Northridge earthquake. "He told me that he did not feel any strong shaking during his tenure as director of the Seismo Lab, and probably this was his first experience with strong ground shaking," Kanamori says.

Press received 30 honorary degrees and has a mountain named after him in Antarctica. He is survived by two children, two grandchildren, and two great-grandchildren.