Researchers at Caltech have developed a way to eke more energy out of solar power— collecting freshly charged particles before they have an opportunity to cool off, so to speak.

This fundamental research could one day help scientists harvest energy from the sun more efficiently than by the natural photosynthesis used by plants. A study describing the process was published on July 27 by the journal Nature Materials.

One of the fundamental processes of natural photosynthesis is the separation of electrons from holes, and then the "collection" of these free, charged quasiparticles—called "carriers."

Not all carriers are created equal. When excited by a broad-spectrum light source, like the sun, carriers get very excited and carry a lot of energy—becoming "hot carriers." Soon after, they drop down to a lower energy state and become "relaxed carriers." Currently, solar panels are capable of separating and harvesting only relaxed carriers, which is part of why solar panel efficiencies tend to hover in the 15-20 percent range.

"If hot carriers, transporting more energy, could be captured, we would be able to wring three to four times as much energy from solar power," says Harry Atwater, corresponding author of the Nature Materials paper. Atwater is the Howard Hughes Professor of Applied Physics and Materials Science and director of the Joint Center for Artificial Photosynthesis (JCAP). JCAP was established as a Department of Energy (DOE) Energy Innovation Hub in 2010, with a charge to develop new and effective ways to turn sunlight into chemical fuels.

Atwater and his colleagues demonstrated, for the first time, a charge-separation process that leads to the collection of the hot carriers. They created a junction between a metal (gold) and a semiconductor (gallium nitride), and then used laser pulses to excite electron-hole pairs. Less than 200 femtoseconds after each laser pulse—before the carriers have time to relax to a lower energy state—they hit the pair with another burst of light called a probe, separating the electrons from the holes, and keeping the holes open—"collecting" them while they were still "hot." (For reference, a femtosecond is one millionth of one billionth of a second.)

In addition to harvesting hot holes, the team was able to observe how the holes relaxed down to a lower energy state—gaining insight into how the process works. They were surprised to discover that when they harvested a hot hole, it changed the relaxation dynamics of the paired hot electron. "The goal was to collect both electrons and holes, but instead we were able to collect holes and watch the relaxation process," Atwater says. "It was a welcome surprise. We didn't know or expect that the electron and hole relaxation processes would be so interdependent."

"We're still developing basic insights into how to harvest hot carriers. But mastering this is going to be crucial to a more efficient conversion of sunlight into usable energy," Atwater says. 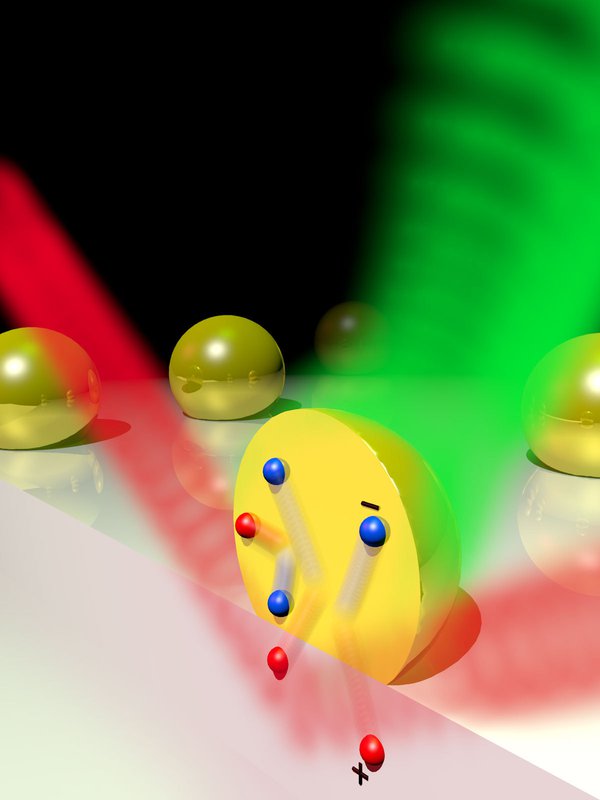