For women over 40, mammography is a necessary yet annoying procedure to endure every year or two. The technique, while valuable for reducing breast cancer deaths, is less than ideal because it exposes patients to X-ray radiation and requires their breasts to be painfully squished between plates. The plates flatten the breast so the X-rays can more easily pass through it and produce a clear image.

Early detection has been shown to increase breast cancer survival rates, but many women avoid having their mammograms taken as often as they should because of the discomfort involved. A 2013 study found that as many as half of women who were avoiding their mammograms cited pain as the reason why.

Mammography also has trouble with breasts, such as those in young women, that are "radiographically dense," or somewhat opaque to X-rays. And mammography tends to overdiagnose, causing around half of women to receive a false-positive diagnosis at some point in their lives.

Caltech researchers say they have developed something better: a laser-sonic scanner that can find tumors in as little as 15 seconds by shining pulses of light into the breast. The scanning system, known as photoacoustic computed tomography, or PACT, was developed in the lab of Lihong Wang, Caltech's Bren Professor of Medical Engineering and Electrical Engineering.

PACT works by shining a near-infrared laser pulse into the breast tissue. The laser light diffuses through the breast and is absorbed by oxygen-carrying hemoglobin molecules in the patient's red blood cells, causing the molecules to vibrate ultrasonically. Those vibrations travel through the tissue and are picked up by an array of 512 tiny ultrasonic sensors around the skin of the breast. The data from those sensors are used to assemble an image of the breast's internal structures in a process that is similar to ultrasound imaging, though much more precise. PACT can provide a clear view of structures as small as a quarter of a millimeter at a depth of 4 centimeters. Mammograms cannot provide soft-tissue contrast with the level of detail in PACT images, Wang says.

Because the laser light at the currently used wavelength is so strongly absorbed by hemoglobin, PACT can construct images that primarily show the blood vessels present in the tissue being scanned. That's useful for finding cancer because many tumors grow their own blood vessels, surrounding themselves with dense networks of vascular tissue. Those vessels provide the tumors with large amounts of blood and allow the tumors to grow quickly.

During a PACT scan, the patient lies face down on a table that has a recess containing ultrasonic sensors and the laser. One breast at a time is placed in the recess, and the laser shines into it from underneath. Since the scan is quick, taking only 15 seconds, the patient can easily hold their breath while being scanned, and a clearer image can be developed.

"This is the only single-breath-hold technology that gives us high-contrast, high-resolution, 3-D images of the entire breast," Wang says.

The speed with which a PACT scan can be performed gives it advantages over other imaging techniques. For example, magnetic resonance imaging (MRI) scans can take 45 minutes. MRI scans are also expensive and sometimes requires contrast agents to be injected into the patient's blood.

"Gadolinium, for example, is a common contrast agent for MRI which is not totally innocuous," Wang says. "Gadolinium may cause nausea and vomiting, and can remain in the brain for years, with unknown long-term effects. In comparison, PACT is entirely safe; the blood serves as an intrinsic contrast agent, and the laser exposure is well within the safety limits."

In a recent pilot study, the researchers scanned the breasts of eight women using PACT, and correctly identified eight of the nine breast tumors that were present.

The PACT technology has already been licensed by a company, of which Wang is a founder and shareholder, that plans to commercialize it and conduct large-scale clinical studies, Wang says.

"Our goal is to build a dream machine for breast screening, diagnosis, monitoring, and prognosis without any harm to the patient," he says. "We want it to be fast, painless, safe, and inexpensive."

Wang says future research may focus on using PACT for imaging other parts of the body. It could give medical personnel the ability to assess the health of the vascular tissue in the extremities of a patient with diabetes, for example. Diabetes damages blood vessels and, if not properly diagnosed and treated, can cause tissue death, particularly in the feet. PACT is also able to differentiate between oxygenated and non-oxygenated blood; Wang says that could further improve the device's ability to find tumors, since cancer tissue, with its high oxygen demands, deoxygenates blood more rapidly than healthy tissue.

An article describing the research, titled "Single-Breath-Hold Photoacoustic Computed Tomography of the Breast," appears in the June 15 issue of Nature Communications. Wang's co-authors include Li Lin, Junhui Shi, Lei Li, and Konstantin Maslov of the Caltech Optical Imaging Laboratory (COIL); Peng Hu and Ruiying Zhang of the Department of Biomedical Engineering at Washington University in St Louis; and Catherine M. Appleton of the Breast Imaging Section at Washington University School of Medicine in St. Louis. Funding was provided by the United States National Institutes of Health. 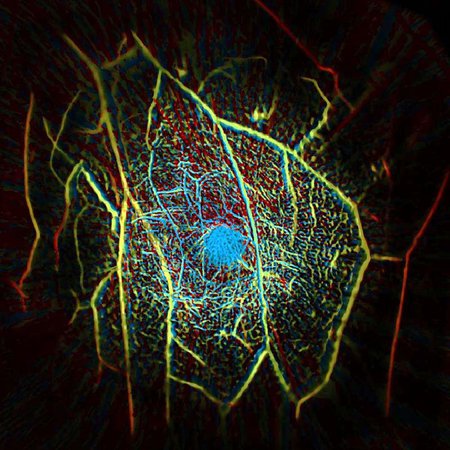 An image of the internal vascular structure of a human breast created with a new scanner designed at Caltech. Credit: Caltech
Image Lightbox 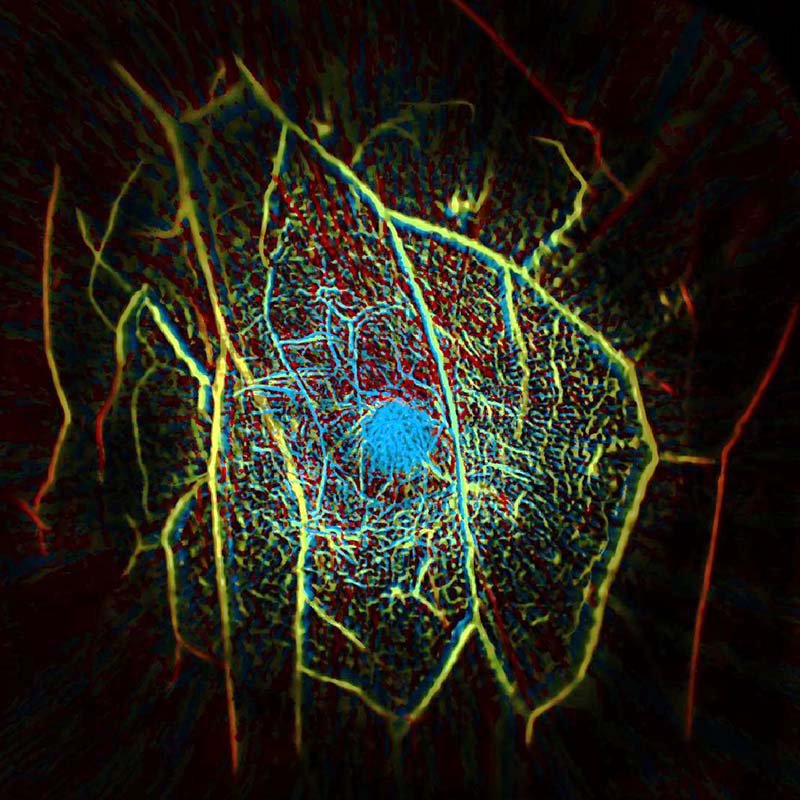 An image of the internal vascular structure of a human breast created with a new scanner designed at Caltech.
Credit: Caltech
Download Full Image
Subscribe
The Caltech Weekly