For the first time, it is possible to create complex nanoscale metal structures using 3-D printing, thanks to a new technique developed at Caltech.

The process, once scaled up, could be used in a wide variety of applications, from building tiny medical implants to creating 3-D logic circuits on computer chips to engineering ultralightweight aircraft components. It also opens the door to the creation of a new class of materials with unusual properties that are based on their internal structure. The technique is described in a study that will be published in Nature Communications on February 9.

In 3-D printing—also known as additive manufacturing—an object is built layer by layer, allowing for the creation of structures that would be impossible to manufacture by conventional subtractive methods such as etching or milling. Caltech materials scientist Julia Greer is a pioneer in the creation of ultratiny 3-D architectures built via additive manufacturing. For instance, she and her team have built 3-D lattices whose beams are just nanometers across—far too small to be seen with the naked eye. These materials exhibit unusual, often surprising properties; Greer's team has created exceptionally lightweight ceramics that spring back to their original shape, spongelike, after being compressed.

Greer's group 3-D prints structures out of a variety of materials, from ceramics to organic compounds. Metals, however, have been difficult to print, especially when trying to create structures with dimensions smaller than around 50 microns, or about half the width of a human hair.

Two-photon lithography is used to 3-D print structures out of a liquid material, creating chemical bonds that harden into a solid material.
Image Lightbox

Two-photon lithography is used to 3-D print structures out of a liquid material, creating chemical bonds that harden into a solid material.
Download Full Image

The way 3-D printing works at the nanoscale is that a high-precision laser zaps the liquid in specific locations of the material with just two photons, or particles of light. This provides enough energy to harden liquid polymers into solids, but not enough to fuse metal.

"Metals don't respond to light in the same way as the polymer resins that we use to manufacture structures at the nanoscale," says Greer, professor of materials science, mechanics, and medical engineering in Caltech's Division of Engineering and Applied Science. "There's a chemical reaction that gets triggered when light interacts with a polymer that enables it to harden and then form into a particular shape. In a metal, this process is fundamentally impossible."

Computer modeling shows how a tiny lattice is 3-D printed in 150-nanometer layers. When the structure is heated, it can shrink by 80 percent.
Image Lightbox

Computer modeling shows how a tiny lattice is 3-D printed in 150-nanometer layers. When the structure is heated, it can shrink by 80 percent.
Download Full Image

Greer's graduate student Andrey Vyatskikh came up with a solution. He used organic ligands—molecules that bond to metal—to create a resin containing mostly polymer, but which carries along with it metal that can be printed, like a scaffold.

In the experiment described in the Nature Communications paper, Vyatskikh bonded together nickel and organic molecules to create a liquid that looks a lot like cough syrup. They designed a structure using computer software, and then built it by zapping the liquid with a two-photon laser. The laser creates stronger chemical bonds between the organic molecules, hardening them into building blocks for the structure. Since those molecules are also bonded to the nickel atoms, the nickel becomes incorporated into the structure. In this way, the team was able to print a 3-D structure that was initially a blend of metal ions and nonmetal, organic molecules.

To test the strength of the resulting structure, Greer crushes it and records its reaction.
Image Lightbox

To test the strength of the resulting structure, Greer crushes it and records its reaction.
Download Full Image

Vyatskikh then put the structure into an oven that slowly heated it up to 1,000 degrees Celsius (around 1,800 degrees Fahrenheit) in a vacuum chamber. That temperature is well below the melting point of nickel (1,455 degrees Celsius, or about 2,650 degrees Fahrenheit) but is hot enough to vaporize the organic materials in the structure, leaving only the metal. The heating process, known as pyrolysis, also fused the metal particles together.

In addition, because the process vaporized a significant amount of the structure's material, its dimensions shrank by 80 percent, but it maintained its shape and proportions.

"That final shrinkage is a big part of why we're able to get structures to be so small," says Vyatskikh, lead author on the Nature Communications paper. "In the structure we built for the paper, the diameter of the metal beams in the printed part is roughly 1/1000th the size of the tip of a sewing needle."

Greer and Vyatskikh are still refining their technique; right now, the structure reported on in their paper includes some voids left behind by the vaporized organic materials as well as some minor impurities. Also, if the technique is to be of use to industry, it will need to be scaled up to produce much more material, says Greer. Although they started with nickel, they are interested in expanding to other metals that are commonly used in industry but are challenging or impossible to fabricate in small 3-D shapes, such as tungsten and titanium. Greer and Vyatskikh are also looking to use this process to 3-D print other materials, both common and exotic, such as ceramics, semiconductors, and piezoelectric materials (materials with electrical effects that result from mechanical stresses).

The study is titled "Additive Manufacturing of 3D Nano-Architected Metals." Co-authors include Caltech Resnick Sustainability Institute Postdoctoral Scholar in Applied Physics and Materials Science Akira Kudo and mechanical engineering graduate student Carlos Portela as well as collaborators Stéphane Delalande of the Centre Technique de Vélizy in France and Xuan Zhang of Tsinghua University in China. Funding for this research came from the Department of Defense. 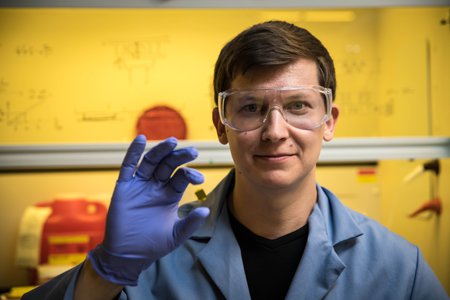 Caltech graduate student Andrey Vyatskikh shows a square of silicon substrate upon which a 3-D metal structure has been printed. The structure itself is smaller than a speck of dust. Credit: Caltech 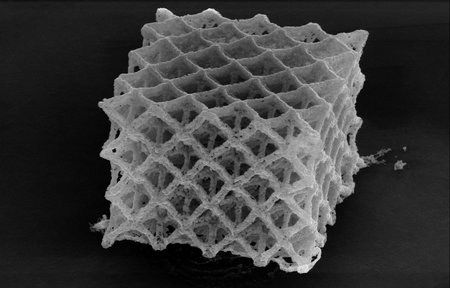 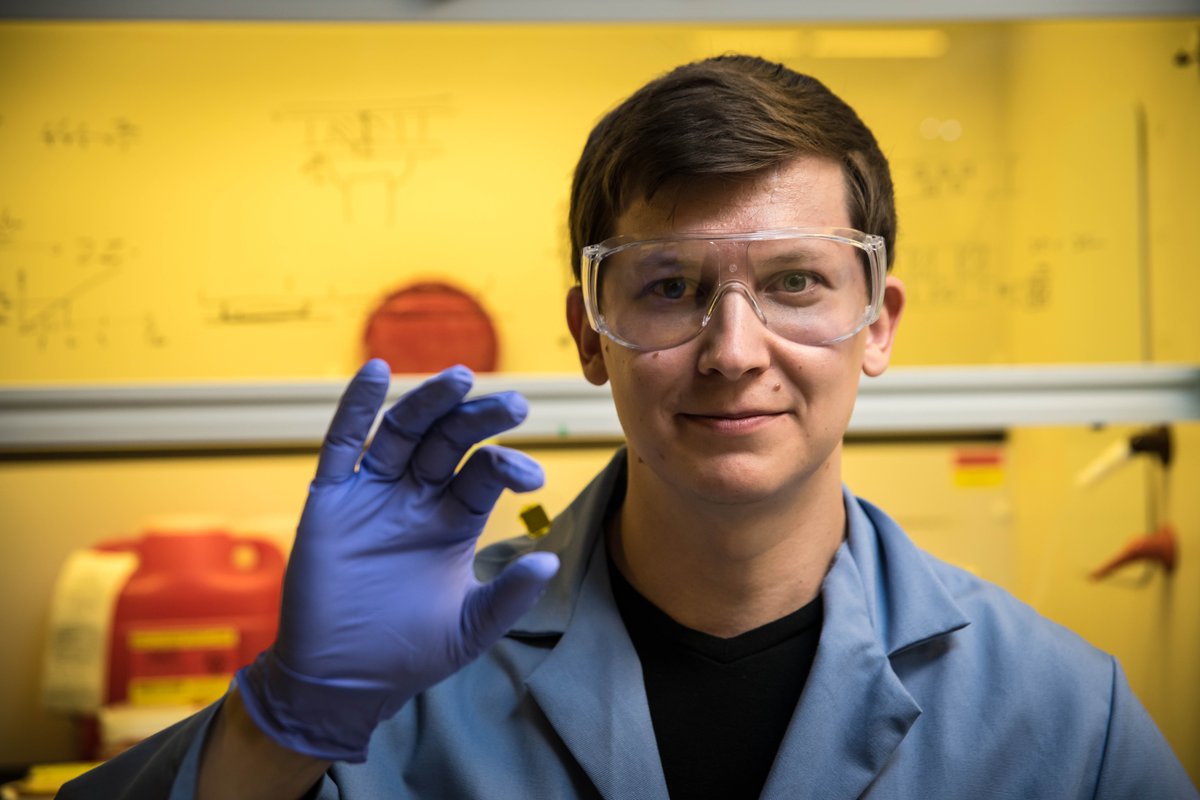 Caltech graduate student Andrey Vyatskikh shows a square of silicon substrate upon which a 3-D metal structure has been printed. The structure itself is smaller than a speck of dust.
Credit: Caltech
Download Full Image 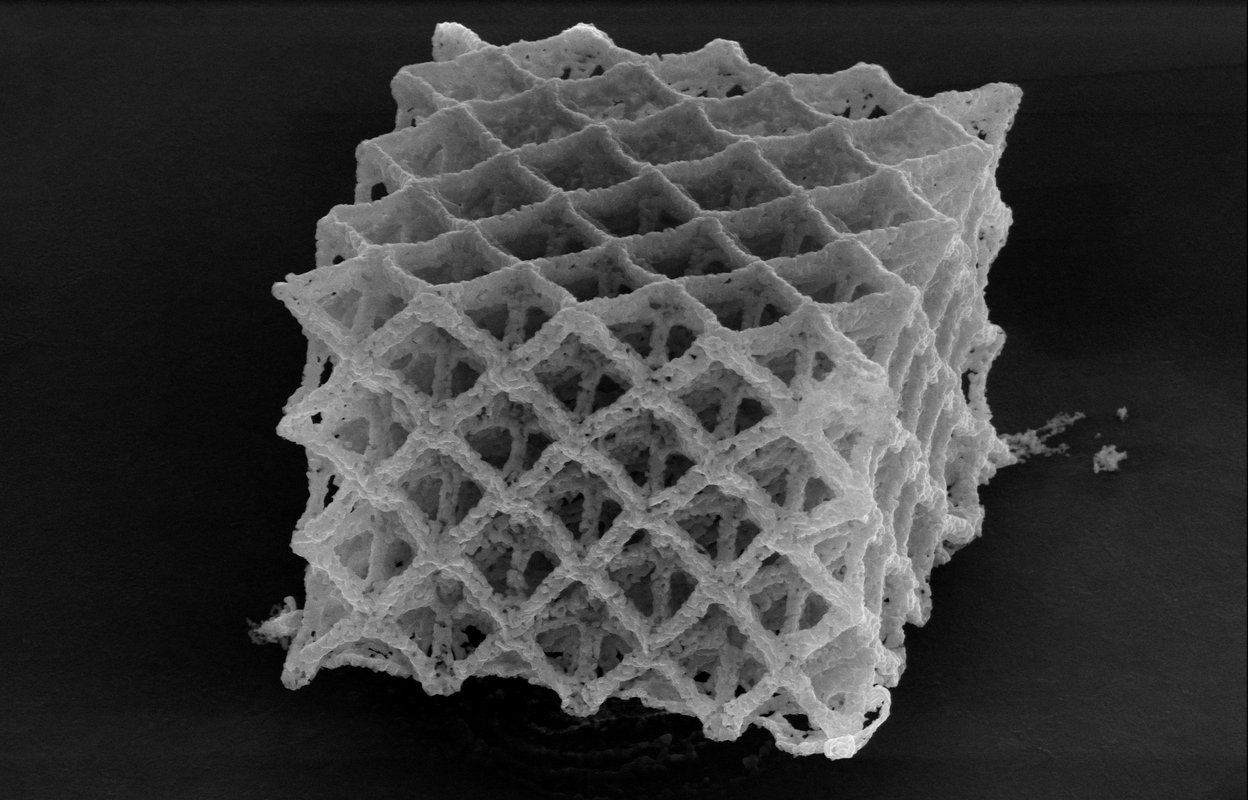