A New Tool for Secret Agents—And the Rest of Us

PASADENA, Calif.—A secret agent is racing against time. He knows a bomb is nearby. He rounds a corner, spots a pile of suspicious boxes in the alleyway, and pulls out his cell phone. As he scans it over the packages, their contents appear onscreen. In the nick of time, his handy smartphone application reveals an explosive device, and the agent saves the day.

Sound far-fetched? In fact it is a real possibility, thanks to tiny inexpensive silicon microchips developed by a pair of electrical engineers at the California Institute of Technology (Caltech). The chips generate and radiate high-frequency electromagnetic waves, called terahertz (THz) waves, that fall into a largely untapped region of the electromagnetic spectrum—between microwaves and far-infrared radiation—and that can penetrate a host of materials without the ionizing damage of X-rays.

When incorporated into handheld devices, the new microchips could enable a broad range of applications in fields ranging from homeland security to wireless communications to health care, and even touchless gaming. In the future, the technology may lead to noninvasive cancer diagnosis, among other applications.

"Using the same low-cost, integrated-circuit technology that's used to make the microchips found in our cell phones and notepads today, we have made a silicon chip that can operate at nearly 300 times their speed," says Ali Hajimiri, the Thomas G. Myers Professor of Electrical Engineering at Caltech. "These chips will enable a new generation of extremely versatile sensors."

Hajimiri and postdoctoral scholar Kaushik Sengupta (PhD '12) describe the work in the December issue of IEEE Journal of Solid-State Circuits.

Researchers have long touted the potential of the terahertz frequency range, from 0.3 to 3 THz, for scanning and imaging. Such electromagnetic waves can easily penetrate packaging materials and render image details in high resolution, and can also detect the chemical fingerprints of pharmaceutical drugs, biological weapons, or illegal drugs or explosives. However, most existing terahertz systems involve bulky and expensive laser setups that sometimes require exceptionally low temperatures. The potential of terahertz imaging and scanning has gone untapped because of the lack of compact, low-cost technology that can operate in the frequency range.

To finally realize the promise of terahertz waves, Hajimiri and Sengupta used complementary metal-oxide semiconductor, or CMOS, technology, which is commonly used to make the microchips in everyday electronic devices, to design silicon chips with fully integrated functionalities and that operate at terahertz frequencies—but fit on a fingertip.

"This extraordinary level of creativity, which has enabled imaging in the terahertz frequency range, is very much in line with Caltech's long tradition of innovation in the area of CMOS technology," says Ares Rosakis, chair of Caltech's Division of Engineering and Applied Science. "Caltech engineers, like Ali Hajimiri, truly work in an interdisciplinary way to push the boundaries of what is possible."

The new chips boast signals more than a thousand times stronger than existing approaches, and emanate terahertz signals that can be dynamically programmed to point in a specified direction, making them the world's first integrated terahertz scanning arrays.

Using the scanner, the researchers can reveal a razor blade hidden within a piece of plastic, for example, or determine the fat content of chicken tissue. "We are not just talking about a potential. We have actually demonstrated that this works," says Hajimiri. "The first time we saw the actual images, it took our breath away."

Hajimiri and Sengupta had to overcome multiple hurdles to translate CMOS technology into workable terahertz chips—including the fact that silicon chips are simply not designed to operate at terahertz frequencies. In fact, every transistor has a frequency, known as the cut-off frequency, above which it fails to amplify a signal—and no standard transistors can amplify signals in the terahertz range.

"Traditionally, people have tried to make these technologies work at very high frequencies, with large elements producing the power. Think of these as elephants," says Hajimiri. "Nowadays we can make a very large number of transistors that individually are not very powerful, but when combined and working in unison, can do a lot more. If these elements are synchronized—like an army of ants—they can do everything that the elephant does and then some."

The researchers also figured out how to radiate, or transmit, the terahertz signal once it has been produced. At such high frequencies, a wire cannot be used, and traditional antennas at the microchip scale are inefficient. What they came up with instead was a way to turn the whole silicon chip into an antenna. Again, they went with a distributed approach, incorporating many small metal segments onto the chip that can all be operated at a certain time and strength to radiate the signal en masse.

"We had to take a step back and ask, 'Can we do this in a different way?'" says Sengupta. "Our chips are an example of the kind of innovations that can be unearthed if we blur the partitions between traditional ways of thinking about integrated circuits, electromagnetics, antennae, and the applied sciences. It is a holistic solution."

The paper is titled "A 0.28 THz Power-Generation and Beam-Steering Array in CMOS Based on Distributed Active Radiators." IBM helped with chip fabrication for this work. 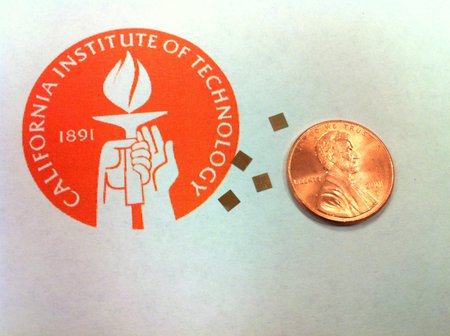 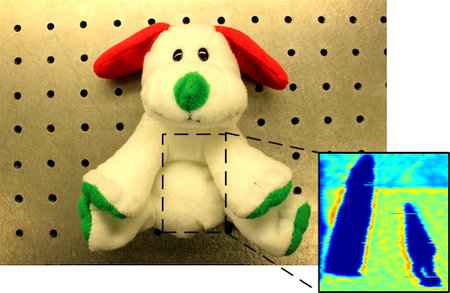 A bullet and a knife blade hidden inside a toy. Inset: The teraherz image obtained with the silicon chip reveals the hidden objects without needing to cut open the toy. Credit: Kaushik Sengupta/Caltech 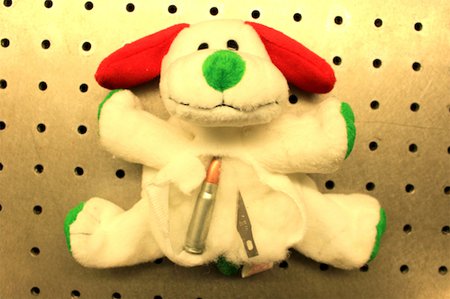 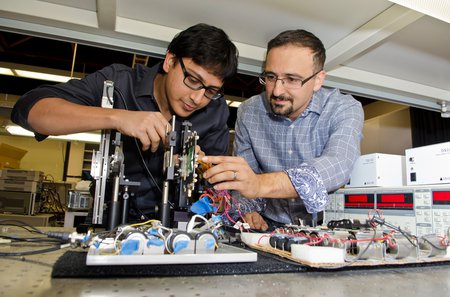 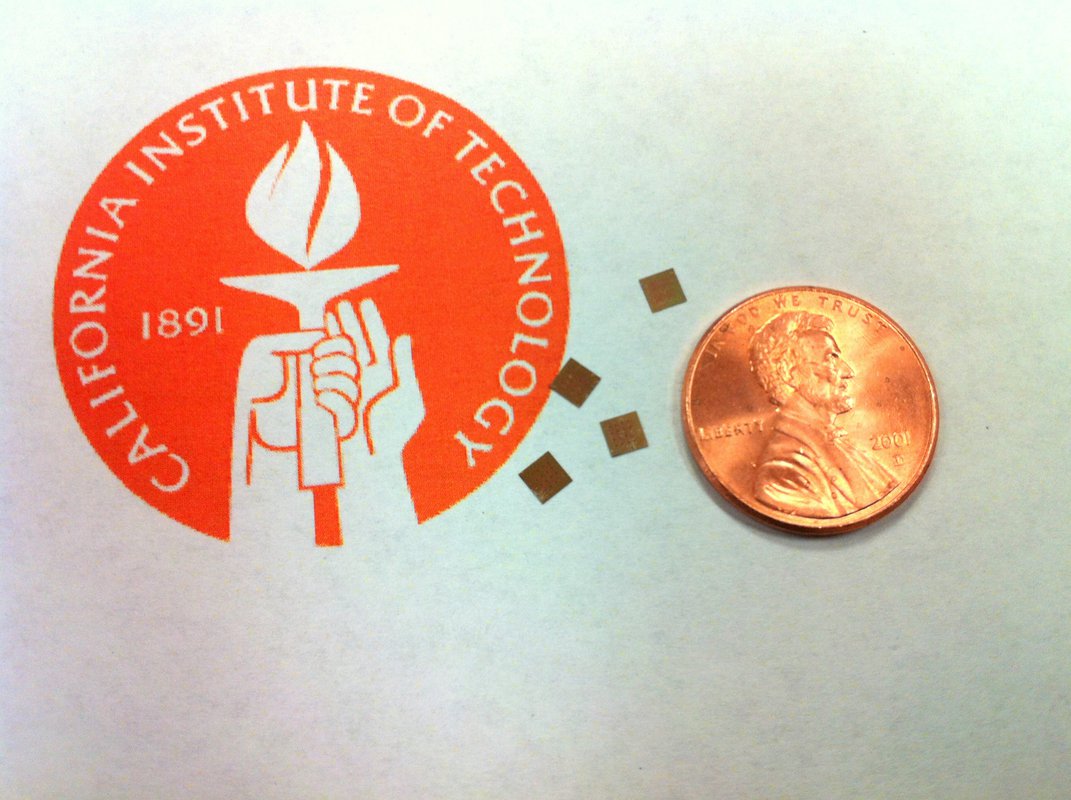 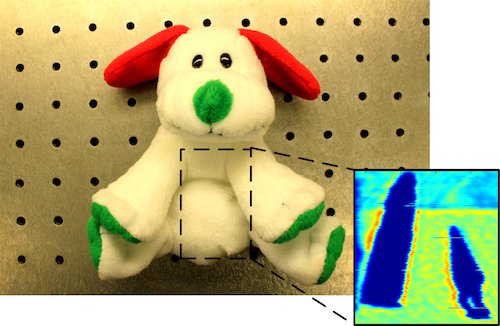 A bullet and a knife blade hidden inside a toy. Inset: The teraherz image obtained with the silicon chip reveals the hidden objects without needing to cut open the toy.
Credit: Kaushik Sengupta/Caltech
Download Full Image 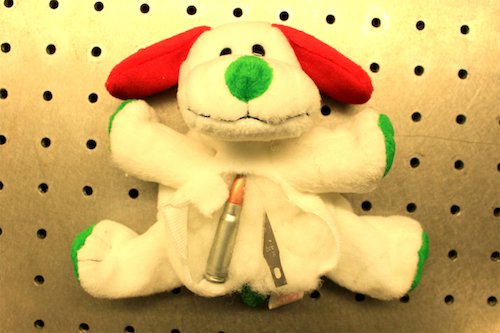 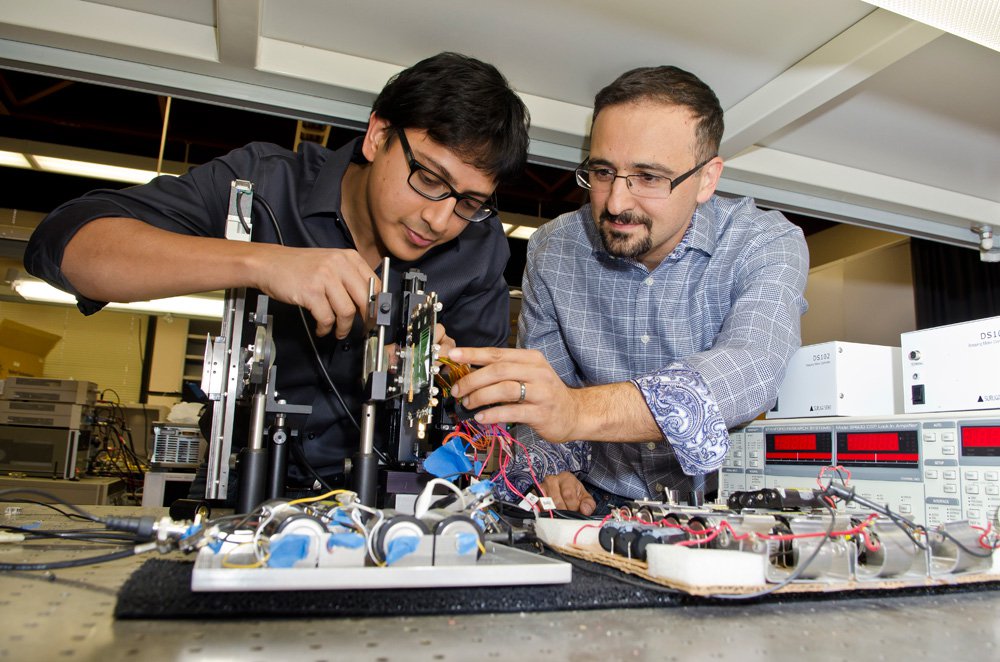