On November 16 and 17, the Caltech Orchestra will present its Student Soloist Showcase in Ramo Auditorium. The concerts will feature five Caltech students performing solo works with the orchestra.

"In designing this program," says Glenn Price, interim director of the Caltech Orchestra and director of performing and visual arts, "we were able to choose from some of the finest, and also most technically challenging, repertoire. All five soloists display remarkable abilities, allowing us the opportunity to select masterworks from the orchestral literature."

Wesley Yu, a graduate student in aerospace, will perform the Saint-Saëns' Havanaise for violin. Yu, who has been playing the violin since the age of 4, says that while the Havanaise is a staple of violin solo repertoire, this will be his first time performing the work. "The piece in itself, the technicality of it, is challenging," he says. "It has the full array of virtuoso violin techniques including double stopping, super-fast spiccatos, very bouncy passages, a lot of string crossings and a lot of flourishes. After the intro, it goes super fast, super crazy."

Chemistry graduate student Sean Byrne (shown at top) will play the Romanze for Viola and Orchestra by Max Bruch, making his solo debut with the orchestra. "It's a very lush viola solo that is probably one of the more famous works in the viola repertoire," says Byrne. "While it's not as technically demanding as some, it's still a very meaty piece."

After the intermission, three piano soloists: Karlming Chen, Forte Shinko, and Youngjoon Choi, will each play a movement of the iconic and much-loved Piano Concerto in G major by Maurice Ravel. Shinko, a mathematics graduate student, will perform the second movement. The first and third movement, he says, are "quite jazzy." Ravel, he notes, spent time in the U.S. and met American composer George Gershwin. "Then he went back to France and composed this concerto, so it's very jazz influenced, and if you didn't know it was Ravel, in some parts of it you might think you were listening to Gershwin."

"Our five student soloists exemplify a hallmark feature of Caltech students, which is that of possessing strong talents in more than one field," says Price. "While our students are driven by their interest in science, they are also artistically inclined and have cultivated their musical abilities to an extraordinarily high level."

In a similar fashion, he adds, "the students who populate all sections of the orchestra, alongside of our Caltech community members, demonstrate these same musical attributes. It is a tremendous pleasure to work with all of our Caltech orchestral musicians. They share their talents and create the special experience for each other, of performing in a symphony orchestra while fulfilling their own inclination to artistic expression."

These concerts—Saturday the 16th at 8:00 p.m. and Sunday the 17th at 3:00 p.m.—are free and open to the public; no tickets or reservations are required. 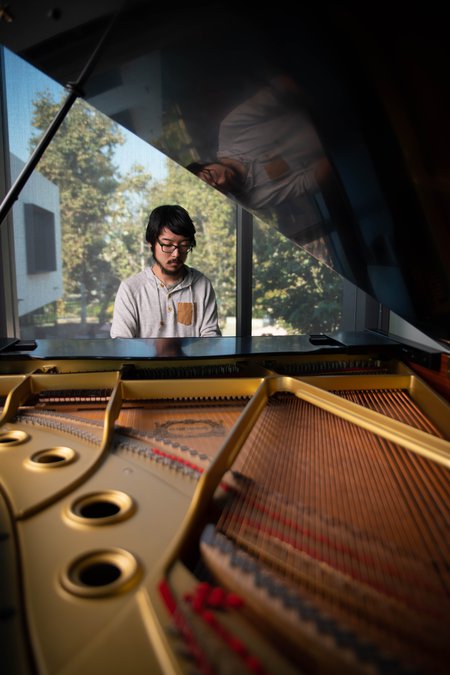