A team led by Caltech recently solved a decades-old materials science mystery by tracking down the origin of entropy in metallic glasses.

Typically, atoms in most materials arrange themselves in stable repeatable patterns along a grid, forming what are generally referred to as crystals. By contrast, metallic glasses are metals that have been heated up until they liquefy, and then cooled so rapidly that they do not have time to crystalize before they solidify. Instead, they have an amorphous, liquid-like atomic-level structure that gives them unique physical properties.

At the glass transition, scientists have noted a sudden increase in entropy in the material being heated. In thermodynamics, entropy is the amount of energy in a system that is unavailable to do work—which is tied to the amount of randomness in a system. As it relates to phase transitions, imagine ice melting into water. When water molecules are locked in the crystalline structure of ice, they are in a low-energy state with fairly predictable locations. When that ice melts into a liquid, those water molecules can flow into almost any position, which is an increase in the randomness—the entropy—of the system.

"The origin of the huge entropy of the glass and liquid compared to the crystal has been discussed in the scientific literature since metallic glasses were discovered at Caltech in 1960," says Caltech's Hillary Smith (MS '10, PhD '14), lead author of a recent paper on entropy in metallic glasses that was published in Nature Physics. Smith is a researcher in the lab of Brent Fultz, Barbara and Stanley R. Rawn, Jr., Professor of Materials Science and Applied Physics in the Division of Engineering and Applied Science at Caltech, and a co-author of the paper.

The team focused on distinguishing between the amount of "configurational entropy" and "vibrational entropy"—the two main sources of entropy in most materials—in metallic glasses.

Imagine dumping a bag of coins out on a tabletop, and then counting up how many landed heads-up versus tails-up. It is possible to get all heads or all tails, but it is statistically more likely to get about half heads and half tails because there are more ways for the coins to arrange themselves in a half-and-half configuration than in an all-heads configuration. In thermodynamics, one would say that the half-heads/half-tails arrangement has a higher configurational entropy.

However, atoms (unlike coins) do not sit still, but rather vibrate around in their position. The amount of this vibrational entropy is determined, in part, by the rigidity of the structure that holds its atoms in place.

The team first evaluated the vibrational entropy of metals in both glass and crystal forms. To do so, they used intense neutron beams at Oak Ridge National Laboratory in Tennessee to bombard each material, ringing each sample like a bell and measuring how it responded. They also measured the total entropy of the glass and crystal using a technique called calorimetry.

"Measuring the amount of the entropy that comes from the atoms' vibrations in a glass wasn't possible a decade ago," Smith says. "It's only thanks to the incredibly intense neutron beams available at Oak Ridge that we could do this experiment. Finally, we found the missing piece in validating a much-debated theory that had never been tested."

Next, the team plans to investigate other types of glasses to determine whether the result is universal for all glasses. 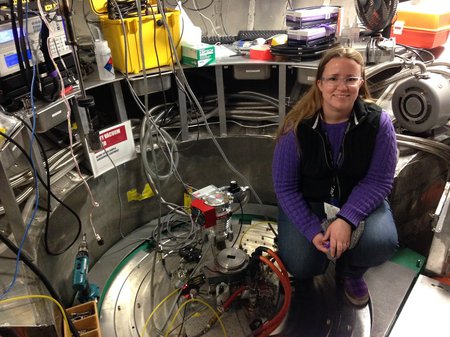 Caltech researcher Hillary Smith on top of the instrument in Oak Ridge, Tennessee, where measurements were performed using an intense neutron beam that passes underneath where Smith is standing. Credit: Caltech/Hillary Smith
Image Lightbox 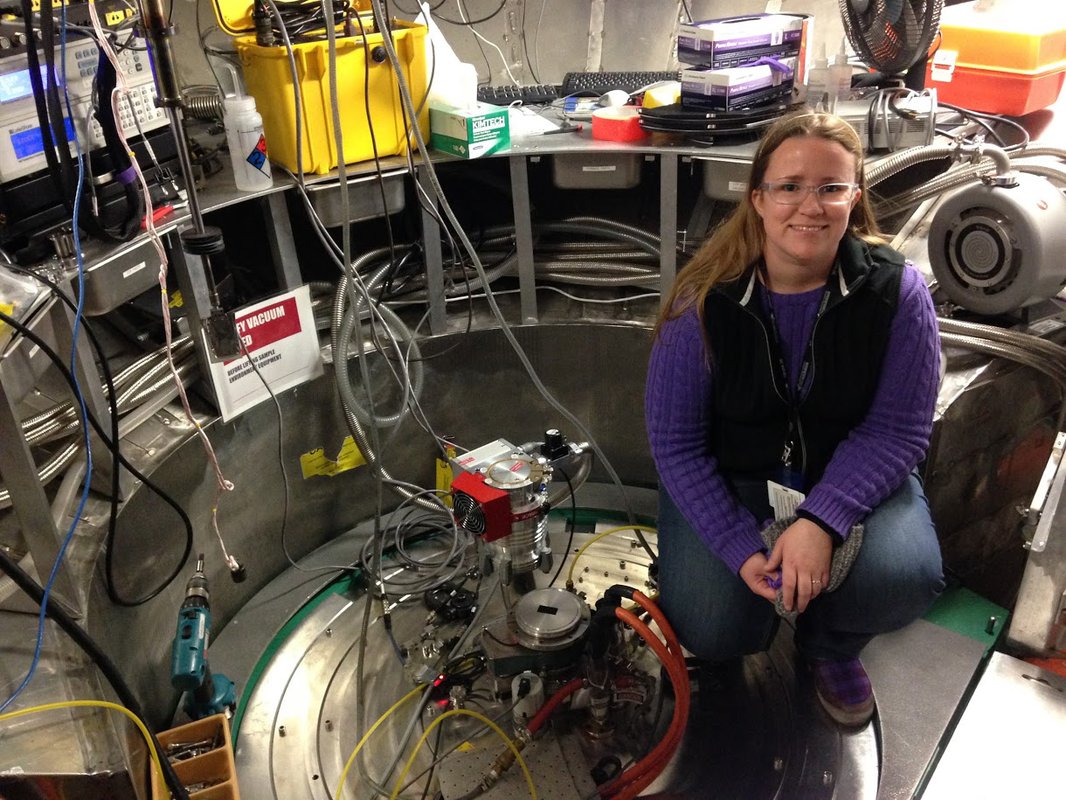 Caltech researcher Hillary Smith on top of the instrument in Oak Ridge, Tennessee, where measurements were performed using an intense neutron beam that passes underneath where Smith is standing.
Credit: Caltech/Hillary Smith
Download Full Image
Subscribe
The Caltech Weekly