Skip to main content
Home  /  About  /  News  /  What Can We Learn From Epidemics Past?

What Can We Learn From Epidemics Past?

Almost a year ago, when Caltech professor of social science history Tracy Dennison proposed a class on the history of epidemics for the winter term of 2021, she had no idea we would still be in the grip of COVID-19. "So, when December 2020 rolled around," she says, "I thought no one was going to want to do this course because we were all so tired of the epidemic. Who would want to spend 10 weeks talking about epidemics?"

As it turned out, she could not have been more wrong. More students than she could accommodate raced to sign up for H/HPS 155, Mortality Crises and Social Change: Epidemic Disease from 1300 to the Present. And Dennison found herself glad she had proposed it, "because I think it's forced me to take a fresh look at some of these things as well."

In a recent conversation, Dennison talked about scapegoating, lockdowns, anti-vaccination campaigns, and more, from the Black Death to COVID-19.

How does this course relate to your research interests?

My interests are in historical political economy, and this is a course about the social context of disease and public health crises over 800 years. How, for instance, did political authorities deal with public health crises? What kinds of social responses were there? What were the economic aspects? It's been really interesting for the students to see just how many of the concerns we have today are evident in various public health crises starting in the mid-14th century up through the 21st century. In the spring term, part two of this course, taught by [Robert M. Abbey Professor of History] Diana Kormos-Buchwald, will look at the medical history of past epidemics.

What did your course cover?

We started with the medieval Black Death, and then we looked at plague in early modern Europe, in the Ottoman Empire, and in 19th-century India. From there, we studied cholera in Germany and England, followed by smallpox and syphilis in Europe and the U.S. After that, we jumped to the 20th century and covered the "Spanish" flu and HIV AIDS, and then looked back at all these from the coronavirus pandemic.

What are some of the similarities you noticed?

With the Black Death in the 14th century we see a lot of social unrest. There are conspiracy theories, and we see a lot of scapegoating, as in, "It must have been this outsider group that's responsible for bringing this disease to us." Minority groups in different communities in Europe, such as the Catalans in Spain, or Jews in many places, were persecuted and viewed as the vectors of disease.

And then, when we get outbreaks in the early modern period, we see the introduction of public health measures like quarantine, and people resisted those strenuously, doing everything they could not to be locked down, evading the law, lying about symptoms. We also see anxiety about the costs of epidemics. We observe political authorities throughout Europe trying to hide outbreaks or downplay them out of concern for the economic effects of admitting to a public health crisis.

During a major plague outbreak in Florence in the 17th century, the city paid to quarantine everyone and made sure they had bread and wine rations. But it was a huge cost, not just supporting everyone during quarantine but also having the city closed down. And of course, back then, you were essentially locked into your house, often with a guard in front, and not allowed to leave at all. So it's not surprising that, when people heard that there might be a quarantine on their road or at their house, many of them just took off.

We had some interesting discussions in class about the history of tradeoffs between public health and individual freedoms. How do you find middle ground? It's something that people in the 17th and 18th centuries were already discussing. And, as now, there was concern that authorities might take advantage of public health crises to crack down on behavior that was threatening to them. So people worried that public health measures could be too restrictive, but at the same time, there were few tools available for bringing public health crises under control.

Another area where we find similarities is around vaccines. From the time the smallpox vaccine was first introduced around 1800, there were very strong anti-vaccination movements in Britain and the U.S. Even when data showed it was very effective, people still viewed it as new and risky, and there was lots of pushback, some of it motivated by religion, some by fear, some by lack of trust in authorities.

The students have been really struck by the disproportionate effect this current pandemic has had on poor and marginalized groups in society. And this is something that, again, was a huge problem in previous epidemics.

Because we haven't experienced this kind of outbreak on a global scale in our lifetimes, we tend to imagine it will play out completely differently because societies are so much more advanced now. We can't imagine there could be these similarities with pre-modern societies.

In what other ways was the course eye opening for students?

What were some other surprising discoveries?

In fact, that's not quite true. People at the time did their best to take measures to prevent themselves from getting sick, to try to understand how disease was spread. They didn't have our scientific knowledge, but they tried to learn from observation. In 17th-century Europe, people start to realize there is something about cloth. They didn't know there was a rat-flea vector for plague, but they noticed that people who were around cloth seemed to get plague. And so, when plague was suspected, they would burn all the cloth, all the bed clothes.

Even before germ theory, people learned through observation and experience, and they took action based on the understanding they had. Even though their theories were all about humors and miasma (foul air), they were clearly making connections. They saw that there were greater outbreaks in the really crowded, poorer parts of town, so they reasoned that they needed to improve conditions. And it was accepted that measures like quarantine and cordons sanitaires [barriers used to stop the spread of infectious diseases] were necessary to reduce the spread of diseases like plague.

What were some of the main takeaways from the course?

Our memories for epidemics are very short. We keep hearing that things will never be the same again, but that's not what the history tells us. Some things may change, but the kind of profound social reorganization one might expect is unlikely. And the things that do change will be things that were already changing—things that just needed an extra nudge in that direction. Also, people today may be behaving in ways that aren't helping the public health crisis, but that's always been the case. If we took a longer perspective, we would ask, why is there always this kind of resistance? And what can be done to better address it next time? 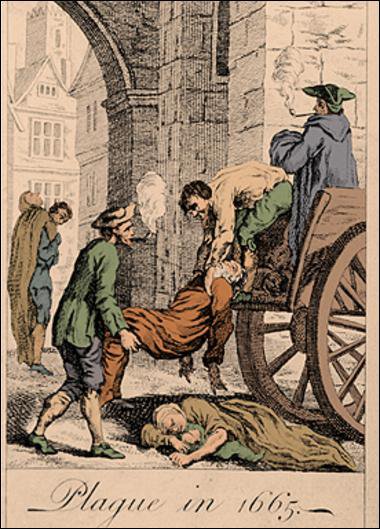